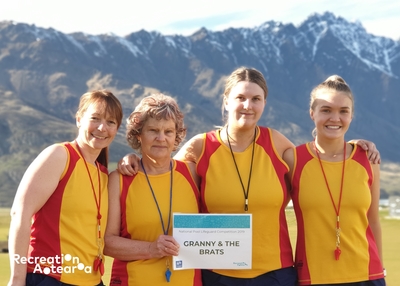 A team of four lifeguards from Balclutha Centennial Pool were the first all-female team to compete at the National Pool Lifeguard Competition, and their local community were behind them all the way.

To enable them to compete at the event, held last month in Queenstown, they had to operate reduced opening hours at the pool, but customers were supportive and wished the team all the best.

Holly Ramsay, Aquatic Services Team Leader for Balclutha District Council, said "We got the community involved by posting on Facebook to keep them updated. When we got back everyone was asking how we'd done, they were really interested."

Whilst the team didn't go on to win the competition, they put in a great performance that stood up against stronger, more experienced teams.

"We just wanted to compete and test ourselves, it wasn't about winning" said Holly. "We only have four full-time lifeguards, which is why we had to close the pool, but it was great to reward the team - they do such a good job".

Group Manager Service Delivery Jules Witt said that the team had been putting in lots of practice for the competition. "Over the past three months, they have increased their regular training regime in preparation for the event and those that come swimming at lunchtimes would have seen the women in action".

Following the competition, lifeguards that have taken part are given the opportunity to attend Waves, New Zealand's premier aquatics conference. This offers them the prospect of professional development within the industry and is a great reward for participants.