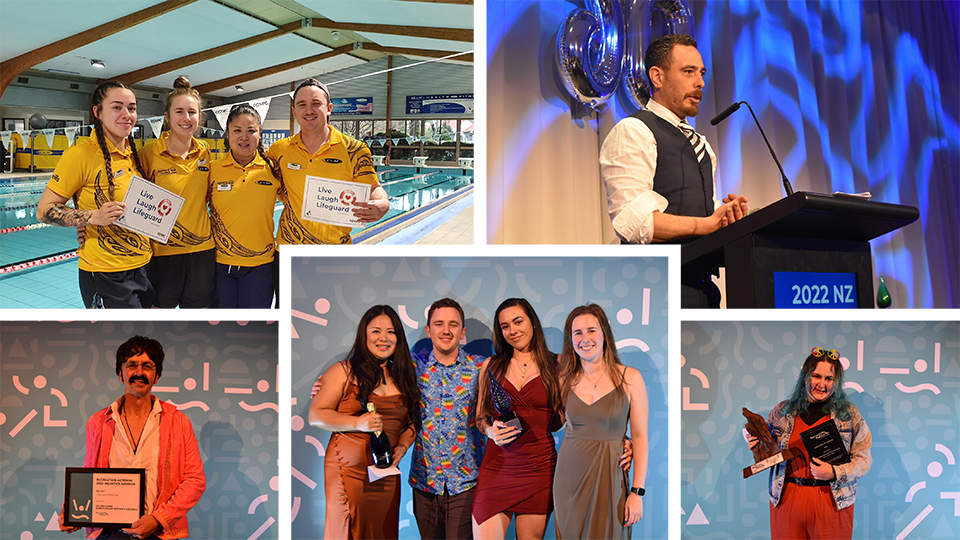 This year the awards were held at the Awapuni Function Centre in Palmerston North, following the annual aquatics conference, Waves. The evening was hosted by Palmerston North local and beloved drag performer, Spankie Jackzon.

The first award of the evening was presented to Live, Laugh, Lifeguard – CLM National, the overall champions of the 2022 OPSEC National Pool Lifeguard Competition. The competition was held at Palmerston North’s Lido Aquatic Centre. Live, Laugh, Lifeguard competed against two other lifeguard teams from around the country and were put through their paces with a series of tasks which included water rescue scenarios, a quiz round, a speed race, and a TikTok challenge.

Recreation Aotearoa Aquatics Programme Manager, Rhiann Collins, said: “the competition is an excellent platform for the lifeguards to show showcase their skills, teamwork, and leadership in a fun way. All three teams were able to highlight their strengths and abilities as individuals and as a team. It was really inspiring to see such passion and determination throughout the competition.”

The second award was the Aquatic Innovation Award, which went to Hamilton City Council for their Swim More Often programme. Hamilton City Council redeveloped their Learn to Swim programme from a traditional four term programme to an all-year-round programme with an increased focus on swim and survive skills that can be applied to real life natural water situations. The judges commented it was great to see a Learn to Swim programme being delivered in a slightly different and more engaging way.

One Merit Award was also presented in this category. Christchurch City Council received merit for their Women’s Wednesdays Swimming Session. The judges appreciated how well-planned the initiative was and said it was a great example of how participation barriers can be removed in our aquatic facilities.

The 2022 Lifeguard of the Year was presented to Joseph Whittaker from Community Leisure Management (CLM). This award is given to a lifeguard who has made a significant contribution to their facility and the aquatics industry.

Joseph started his lifeguard career at the Masterton pools in 2012 where he was promoted to Senior Lifeguard, due to his excellent work ethic and personable customer service. Joseph currently juggles the role of Freyberg Community Pool Aquatics Coordinator during the winter and Aquatics Coordinator for three South Wairarapa pools in the summer. Joseph’s positive attitude towards his work makes him an asset to the wider aquatics industry and a deserving recipient of Lifeguard of the Year.

“The awards have become a highly anticipated event within the recreation sector and the number and quality of nominations we receive each year is a testament to the people and work happening in our industry,” said Rhiann.

“It is a pleasure to be able reward our aquatic professionals and highlight the vital work they do in providing safe, high quality aquatic recreation experiences for their communities.”