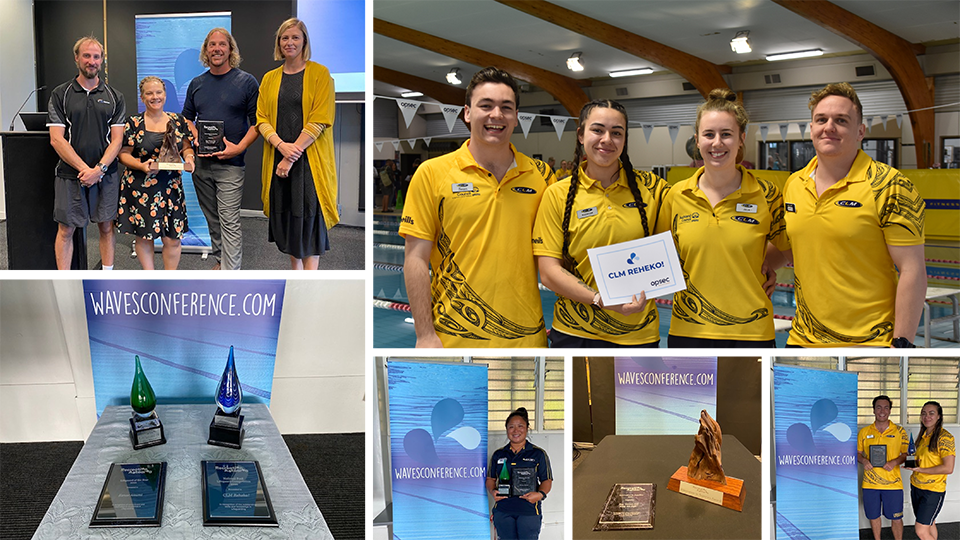 Some of New Zealand’s top aquatic professionals have been recognised for their work in the industry through the 2021 Recreation Aotearoa Aquatics Awards. The awards, postponed in August 2021 due to COVID-19, were presented last week by Recreation Aotearoa representatives.

The Aquatics Awards highlight the important work and innovations carried out by organisations and individuals within the industry.

The 2021 Lifeguard of the Year was presented to Kanae Atsumi. This award is given to a lifeguard who has made a significant contribution to their facility and the aquatics industry.

Kanae started her lifeguard career in Japan and is now based out of CLM’s Parnell Baths as the Aquatics Coordinator. She has been working within CLM for the last 10 years and has become a highly respected and beloved member of the team. Kanae’s passion lies in engaging with youth and upskilling those who work alongside her. Throughout the COVID-19 pandemic, Kanae was integral in providing extra support and assistance for facilities throughout the Auckland region. Her colleagues describe her as resourceful, passionate, and a student of continuous improvement.

Kirsty Knowles, CLM General Manager of Operations, says, “Kanae has worked her way up from a lifeguard to managing an aquatics team at a large and very busy facility, all with English as her second language. She has in depth knowledge on aquatics lifeguard qualifications and is a real asset to her team and the industry.”

The Aquatic Innovation Award went to Bay Venues for their Keep Me Safe child supervision strategy. Keep Me Safe is about caregivers taking ownership of their child’s safety in and around the water. The campaign includes a series of digital and printed signage, communication around adult to child ratio, and a supervision wristband system for children under the age of 10.

Since its implementation in September 2020, the strategy has resulted in a 38% decrease in wet rescues across Bay Venues sites.

The third award was given to CLM Reheko, the overall champions of the 2021 OPSEC National Pool Lifeguard Competition. CLM Reheko, competing against four other teams from around country, were put through their paces with a series of tasks which included water rescue scenarios, a quiz round, and a speed race. The Lifeguard Competition was held on 17 August 2021 in Palmerston North at the Lido Aquatic Centre.

Recreation Aotearoa Aquatics Programme Manager, Tracey Prince-Puketapu says, “the aquatics industry is an integral part of the country’s health and wellbeing, so it’s important for us to recognise the mahi of the people delivering these opportunities. We are really pleased with the outcomes of the 2021 awards and know that the communities of our respective winners will be proud.”